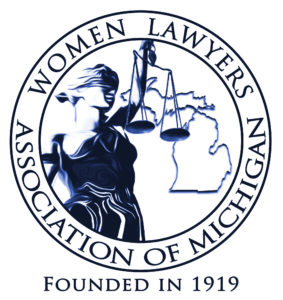 The Women Lawyers Association of Michigan (WLAM) was founded by 5 women attorneys on March 24, 1919, before women won the right to vote. Its initial mission was “to advance the interest of women members of the legal profession and to promote a fraternal spirit among lawyers.” In its early days WLAM was primarily what I would call in modern parlance, a social professional networking group. The primary activity when the group was first founded consisted of monthly meetings, which usually took place in one of the members’ homes. The emphasis was on strengthening professional ties between women lawyers, sharing knowledge, information, and experience, and mentoring younger inexperienced women attorneys. Eventually the format was expanded to include speakers on notable and educational topics and programming involving advancing women in the legal profession and community service. Two of the earlier programs/projects concerned support for the WWII effort and a year long discussion/research project on the topic of labor restrictions against women.